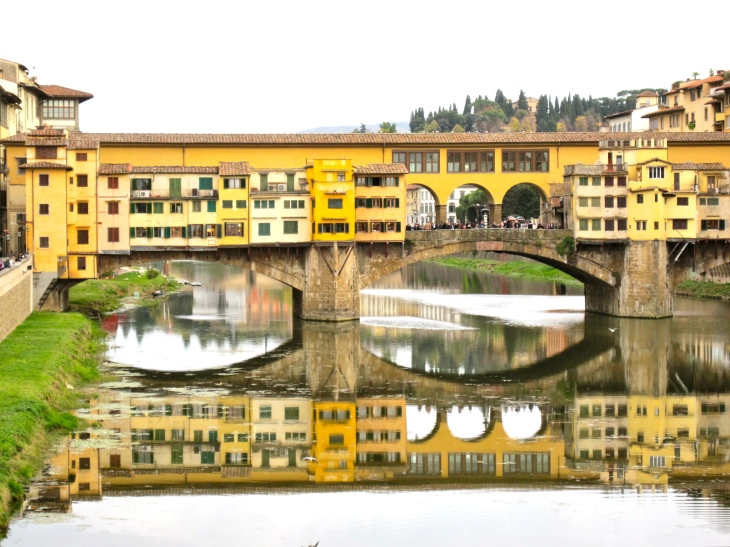 Bridges are normally straightforward structures – sometimes quite striking. They’re built to span a physical obstacle, such as a body of water, a valley, or a roadway, and do nothing more than aid in the movement of vehicles and people.

However, on our recent RTW, we were lucky to see several historical bridges that not only performed a function, but also had interesting pasts.

The Ponte Vecchio in Florence is one of the most famous bridges in the world. As its Italian name implies, it really is an “old bridge,” with roots dating back to the Roman Empire. Earlier wooden bridges on this site were destroyed by floods, but the present structure was built in 1345. Over the years shops were added, literally hanging over the river, and today these shops specialize in jewelry and leather goods. Interestingly, it’s said that the term “bankruptcy” originated here. If a merchant didn’t pay his debts, his “banco” (table) was “rotto” (broken) by soldiers. The process was called “bancorotto” (broken table).

Some bridges have tragic pasts. The Latin Bridge in Sarajevo, Bosnia is not particularly unusual, nor well known, but an event that occurred on its north end in 1914 was the catalyst for a disastrous world event. A Bosnian freedom fighter assassinated Archduke Franz Ferdinand of Austria on this bridge, which plunged Austria-Hungary and the rest of Europe into World War I. The civilian and military deaths from this war were 35 million, all started by two gunshots on a small bridge, immortalized as “the shot heard around the world.” 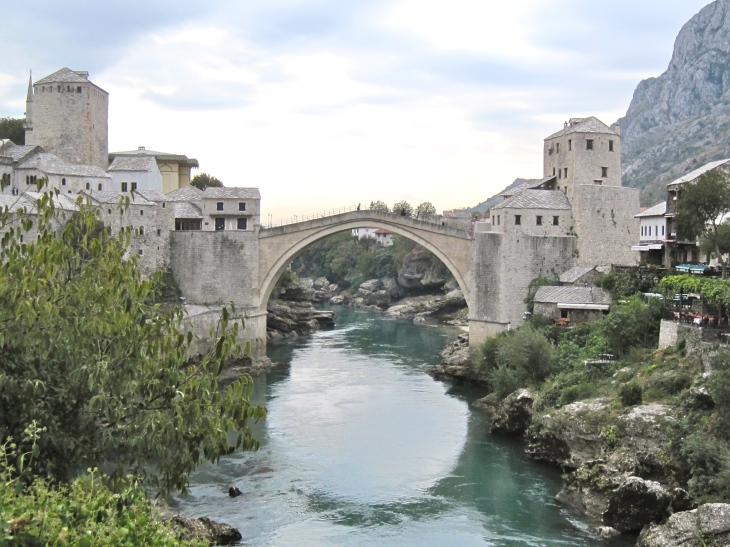 Mostar, Bosnia, which is also no stranger to war, was named after the bridge keepers (mostari) at the Stari Most (Old Bridge). Constructed by the Ottoman Turks in 1566, it was considered a marvel of ingenuity, and eventually became the symbol for the city. In the early 90s, Bosnia declared independence from Yugoslavia, resulting in a horrific war, which eventually came to Mostar. An 18-month siege by Yugoslav troops destroyed the original bridge. Today, Bosnians see the reconstructed bridge as an important sign of their recovery from the appalling war.

And finally, there are few historic bridges in the world that have a view like the famous Sydney Harbor Bridge. Built in 1932, the bridge provides a dramatic view of the beautiful Sydney harbor, skyline, and the Opera House. It’s not only a functional structure, but also a destination. Tourists are outfitted in special protective clothing, attached to a lifeline, and allowed to hike to the apex of the bridge. This “Bridgeclimb” isn’t for the faint of heart, and we decided to delay our climb for the next RTW.